NUPENG CALLS ON KACHIKWU TO RESIGN

NUPENG CALLS ON KACHIKWU TO RESIGN

The Nigeria Union of Petroleum and Natural Gas Workers (NUPENG) has called on the Minister of State for Petroleum Resources who also doubles as Group Managing Director of the Nigerian National Petroleum Corporation (NNPC) Dr. Ibe Kachikwu to resign his appointment for failure to address the challenges facing the oil and gas industry and causing untold hardship on the citizenry.

The Union states that Dr. Ibe Kachikwu should resign for his inability to address the perennial fuel scarcity which has become an epidemic and a cankerworm since his appointment as NNPC Group Managing Director.

The Union reiterates that the man-hours lost at filling stations is becoming unbearable and that he should resign forthwith as all the solutions proffered by him have yielded no results but pains on the suffering masses.

NUPENG adds that Dr. Kachikwu’s anti-peoples policies are too elitist and not in tandem with the campaign promises of the Buhari administration. The Union notes that the proposed plan by NNPC under Dr. Ibe Kachikwu to cut contracting cycle in the oil and gas sector which will impact negatively on the workers in the sector from the current two to four years to six months will further worsen the unemployment situation in the country.

NUPENG adds that the planned privatization of the nation’s assets vis-à-vis, the refineries, depots, jetties through the backdoor to cronnies will further compound the challenges facing the sector. This is borne out of the total failure of the privatization of the Power Holding Company of Nigeria, (PHCN) which brought us total darkness and massive loss of jobs.

The Union states that the policies enunciated by Dr Kachikwu are obnoxious, alien, unworkable and full of semantics and have failed from the on-set, hence the nation’s citizens have continued to suffer with redundancies been declared on a daily basis in the oil and gas sector since he assumed office.

The Union adds that the inconsistencies in the policies and promises never kept have put us in this quagmire.

The Union calls on the Minister of State for Petroleum Resources to resign, instead of the current embarrassment he has put the Buhari administration that promised us job creation and alleviation of poverty.

The Union calls on Government to take the bull by the horn and wet the country with petroleum products to stop the suffering of our people, pay joint venture funds owed oil majors and rehabilitate the refineries and not engage in joint operatorship.

PETROL STATION WORKERS TO DOWN TOOLS

Picture at the meeting

NUPENG COMMENDS NGIGE ON THREAT TO WITHDRAW LICENCES OF BANKS OVER SACK OF WORKERS The Nigeria Union of Petroleum and... read more 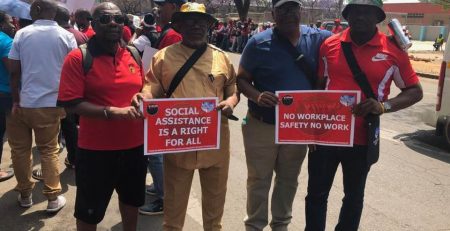 Members of upper echelon of Nigeria Union of Petroleum and Natural Workers (NUPENG) who are presently in South Africa... read more

NUPENG WARNS FEDERAL GOVERNMENT TO DESIST FROM UNBUNDLING THE NNPC

NUPENG CAUTIONS ON TAKE-OVER OF PORT-HARCOURT REFINERY BY OANDO

NUPENG CAUTIONS ON TAKE-OVER OF PORT-HARCOURT REFINERY BY OANDO The Nigeria Union of Petroleum and Natural Gas Workers (NUPENG) is... read more