The Nigeria Union of Petroleum and Natural Gas Workers, (NUPENG) has condemned the recent blow up of Chevron Valve Platform in Abiteye, Warri North Local Government Area in Delta State.

The Union stated that the blow up by suspected militants is not in good taste and must not be allowed to continue.

NUPENG appealed to the suspected militants to sheath their sword and stop the destruction of oil installations and pipelines.

It stated that the blow-up will cost the joint venture partners billions of naira as it will affect crude oil supplies and gas distribution to thermal stations.

The Union urged the militants to stop the dastardly act as it affects the ecosystem through the destruction of aquaculture, farmlands, water, and river pollution arising from the spillage.

The Union called on the militants to desist from the act as it draws the economy back and affects the climate and lives of the citizens of the host community.

It called on the group to embrace peace and not embark on further threats or damage to pipelines.

The Union added that the Federal government should intensify effort to set up the proposed pipelines protection Agency as said by the Vice-President, Yemi Osinbanjo that will be equipped with modern day technology to stem the tide of vandalism

The Union reiterated that the security agencies must redouble their efforts 24/7 with equipment installed with night visions to put a stop to such surprise attacks on oil installations and pipelines.

NUPENG WARNS FEDERAL GOVERNMENT TO DESIST FROM UNBUNDLING THE NNPC 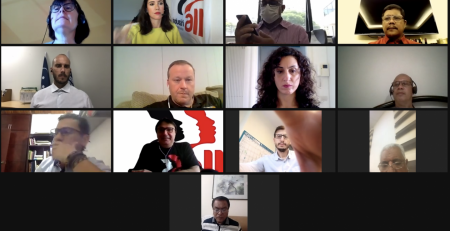 At IndustriALL’s 6th Shell union network meeting, workers from over 15 countries came together virtually to discuss how trends... read more

FROM: General Secretary To: All Zonal Chairmen/Secretaries/SAGS/SOS Dear Comrades, NUPENG NOT ON STRIKE The leadership of our great Union in recent times have... read more